Here’s a little piece of history.

This is Nonda Southern Cross – Denzel’s grand dam Nonda Night Bird as a young and fresh looking 2YO filly back in 1984 being started by an equally young and fresh-looking bloke, the legendary Australian horseman Ian Francis.

Heather Pascoe had shipped Nonda Night Bird down to Ian’s property at Widgee near Gympie from her home at Nonda Downs station near Julia Creek several months earlier.

Heather had first seen Ian Francis putting horses through at the Elders Rockhampton Horse Sale in 1982 and she decided on the spot that he was a young horseman with a very big future.

She subsequently sent two mares to him in 1983 and then Nonda Night Bird followed in 1984.

Ian took an instant liking to the young black filly and predicted a good future for her. Once again, he was right on the money as usual.

N Night Bird was a completely different breed to the stocky Quarter Horses that Ian was building his burgeoning reputation on.

She was effectively a three-quarter thoroughbred since she was by the thoroughbred sire Sky Watch, who was a station sire at Nonda, from the brilliant station camp mare Nonda Cuddles who herself carried three crosses of the champion thoroughbred Hall Mark.

Nonda Night Bird then hit the campaign trail straight up with Ian Francis and won Junior Working Champion of Queensland at Dalby as a late 2YO.

She then went on to win the prestigious Station Hack at Brisbane Royal as a 3YO and ran 2nd at the popular Widgee Futurity to Reggae, another Nonda-owned and Ian Francis trained filly.

N Night Bird quickly showed she was a clever, completely natural mare on her cattle and there are several great photos of Ian cutting out cattle on her.

It was right when she appeared ready to step up and go out drafting that Ian suddenly gave Heather some extremely unusual advice.

“I suggest you breed this mare young, ” he said. “Don’t waste her genetics like everybody else does and end up with an old mare and a bunch of ribbons. I have the feeling that this young mare is going to breed you something very special one day.”

She was duly sent straight off to stud in 1985. Her first mating was to Glen Gough’s good performance horse Rivoli Rex and the resultant filly was the attractive chestnut filly Bounceback.

After being sold at Dalby Sales, the filly later ran second in the Novice at the National Finals (Pete Comiskey). She was subsequently purchased back by Nonda for stud some years later.

Her next two matings were with the local Gympie-based sire Docs Boab.

Around the very early 1990’s, Heather Pascoe discovered Richard Bulls champion cutting horse Docs Freckles Oak at Tamworth. He was by Docs Oak out of a Jewels Leo Bar mare – and for Heather, it was love at first sight.

She also produced much respected horseman Bill Willoughby’s champion all-rounder Nonda Charlie Peno who became something of a household name in South Australia.

Her next Docs Freckles Oak daughter was N Happy Ever After (1993) who hit the jackpot and produced the black stallion Nonda Southern Cross – Denzel, winner of the 2022 Nutrien Open, the 2021 Warwick Fraser’s Stallion Draft, the Condamine Bell Novice and ended up
running second in the Highest Aggregate in the 2021 Triple Crown.

N Night Bird proved to be a once-in-a-lifetime genetic goldmine for Nonda and amazingly, her influence at stud remains as powerful several decades later.

On the other hand, Ian Francis has now been inducted into four different Hall of Fames – The Australian Quarter Horse Hall of Fame, The National Cutting Horse Association Hall of Fame and The Reining Australia Hall of Fame.

So there you have it. The Master Horseman Ian Francis turned out to be as wise in his advice to send a young black mare straight to stud as he turned out to be talented in the saddle – and the Night Bird dynasty is the result. 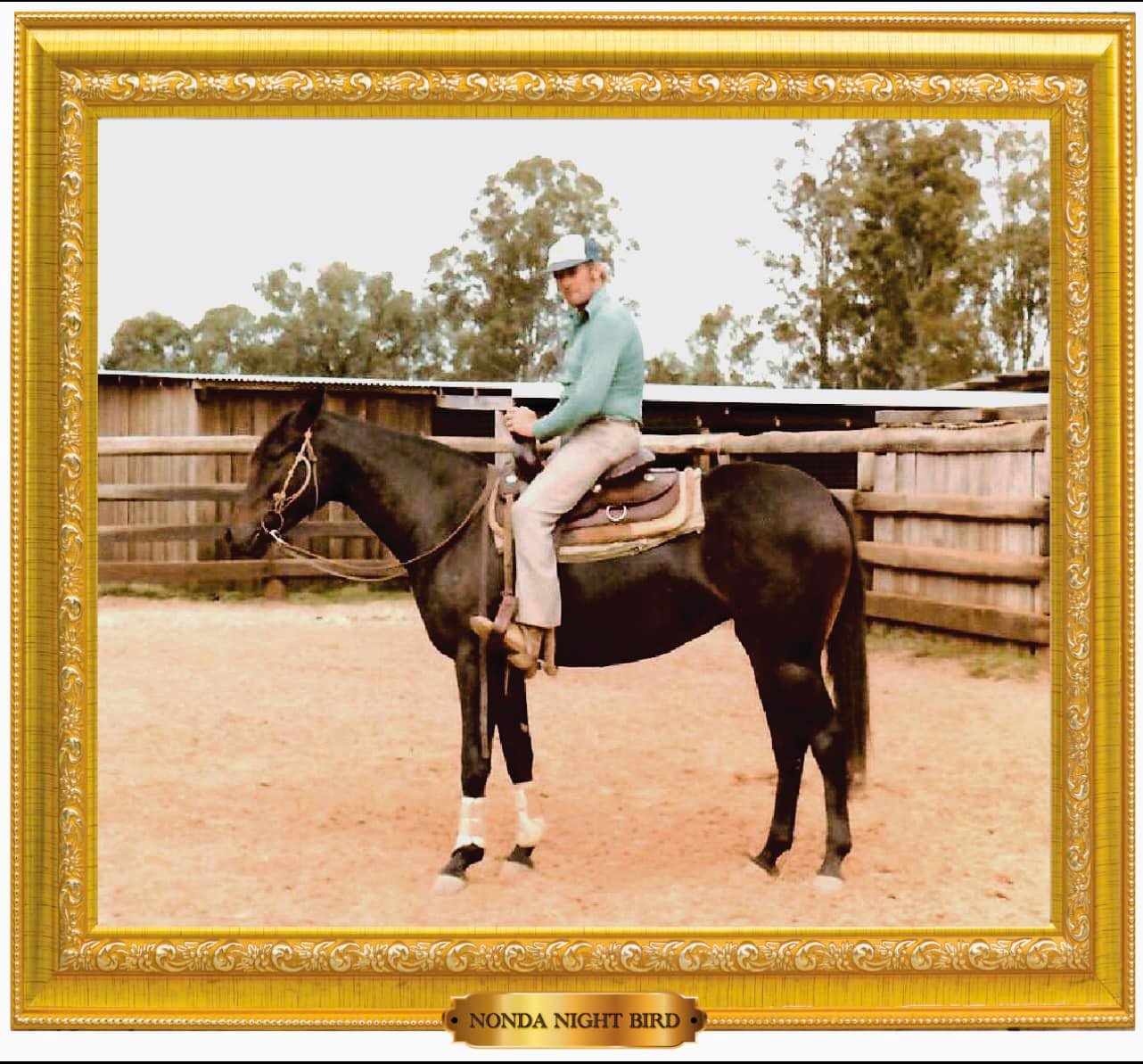 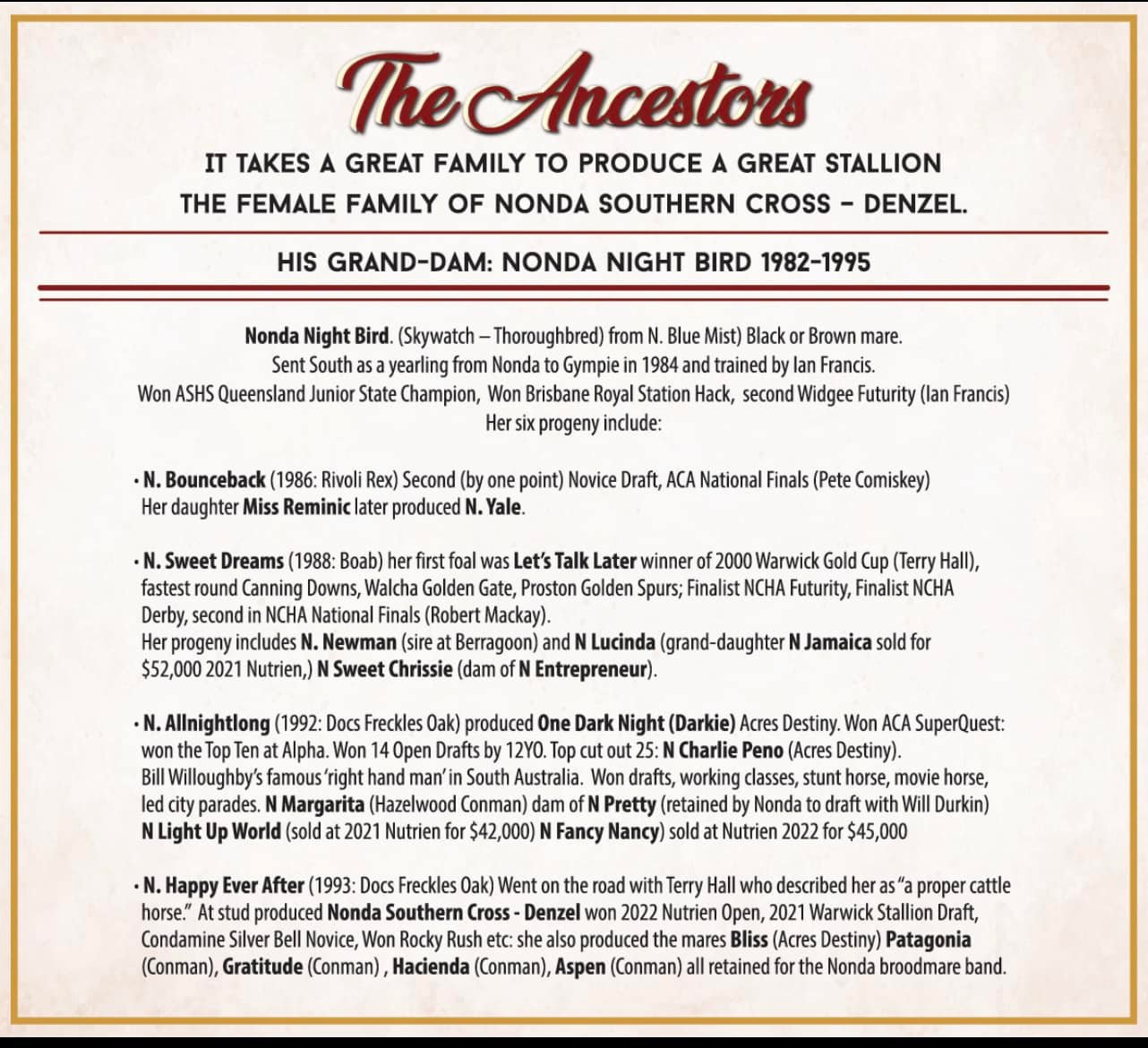