“You have to love what you’re doing. You can’t just stand around for days taking photos of horses if you don’t love it”.
~ Mike Kenyon

Mike started his photography career as a motor racing photographer in 1956. His first gigs were to photograph for the Sportscar World magazine in the days when Jack Brabham was the up and coming superstar of Motor Racing.

As a young man he embarked on an international career, which took him to England. While there he began photographing Formula 1 Racing when Colin Chapman and Jim Clarke were the big names.  He photographed Jackie Stewart as he became a 3 Time World Champion Formula 1 driver.

It was then back to Australia as a young 30+ year old at a loose end. He was invited to attend the County of Cumberland Rodeo and fell in love with the sport. He was fascinated by the characters in the sport, the way they lived and the way they loved their horses.  The challenge of the 8 second ride and the level of skill required to photograph this sport was an instant challenge.

He then started photographing rodeo seriously in 1974 and this was to lead him into photographing Quarter Horses, Campdrafting, Stock Horses and then a huge range of equestrian events.

An early campdrafting assignment was when Rod Carpenter asked him to photograph the 25th Anniversary at Springsure. He photographed all day and then rushed his film to Emerald, had it developed and returned to Springsure with photos for people to look at. This was a new time frame for getting the product to the customer in the late 1990’s. Until then he had been using mailing lists and mailed out small proofs after each run of drafts, rodeo or cutting events.

Around the same time he ventured into the sport of cutting and remembers well the early champions he photographed, including Doc’s  Spinifex and Doc’s Freckles Oak.  Both these sports required a new skill level, however Mike enjoyed the challenge. He says, “You have to love what you’re doing. You can’t just stand around for days taking photos of horses if you don’t love it”.

He acknowledges the improvement in campdrafting expertise over the years and admires the skill level and dedication of the modern campdraft generation. Similarly he has watched the cutting industry evolve into the fully professional and extremely sophisticated industry it is today.

A career highlight for Mike was having an exhibition of his rodeo work taken on a 2 year tour by the Queensland Arts Council in the early 2000’s.

As well as his equine photography, Mike still maintains his photography interest in the water sports he loves. He continues to photograph yachting, sailing and game fishing events. Being intent on being everywhere, Mike was there photographing when Australia lost the Americas Cup in Freemantle.

Mike’s business is now done on the internet and all his shots from all these disciplines can be viewed and ordered on his site. 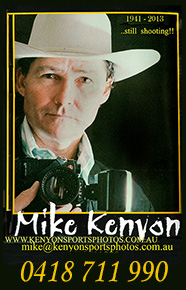