Duck N Down
Born to chase a cow! 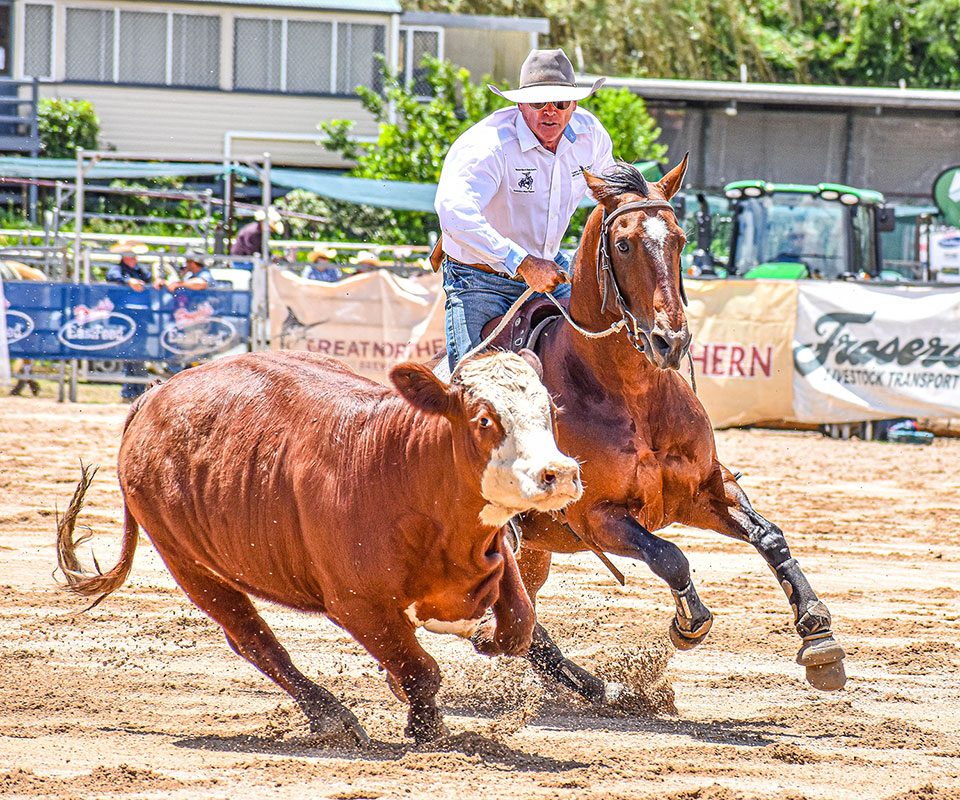 Jamie Gray took a punt when he decided to buy a yearling colt sight-unseen as a future breeding prospect. In 2011, Jamie bought a colt foal based on his excellent genetics. He paid for the colt, organised transport, and waited with excitement to see what would arrive at his property in Grantham, QLD.

“When I saw him I thought, ‘I’ve made a big mistake’”. Jamie laughingly describes the leggy yearling as being ‘all head’ at that time. Fortunately, as the months went on, the colt, named Duck N Down would grow into that head and by maturity developed into a striking 15.2hh horse.

Jamie was keen on stallions by Acres Destiny, but said that at the time it felt like everyone had one. Which is why Duck N Down appealed, being out of an Acres Destiny mare, from an outstanding family of performers; and by a stallion that was breeding top competition horses. That the dam went back to Oaks Fancy Duckling was the clincher.

The main objective Jamie and his partner Kara had for Duck N Down was as a sire for their own mares, and hopefully he would breed future campdrafters. However, there was another little idea that Jamie had in mind. “In the back of my mind, I thought I would like to go cutting on him”. At this point Jamie had no experience in the cutting pen, but knew he had a horse with the genetics to make a potential cutting horse, as well as campdrafter.

At 18-months Duck N Down, known simply as ‘Duck’ was ready to be broken in. Jamie started him, and liked him from the outset. Jamie gave him 6 months solid riding before he had to go away for work. He wanted the horse to stay in work, and sent him to Glen Jones to start cutting training. He would stay with Glen for 12 months.

By this time, it was evident that Duck had a lot of cow-smarts, and the ability to train out for the NCHA Futurity. Jamie sent him to Heath Sinclair for the final 6-months of his preparation for the Futurity. The plan was always to train him for Jamie to show in the Non Pro Futurity, although Jamie did later regret not entering him in the Open Futurity with Heath.

When Jamie rode over the time-line in the AELEC cutting pen at Tamworth, he was easily the least-experienced competitor entered. His total experience was one run at a small show on a friend’s horse.

Duck performed extremely well. Jamie said that he had confidence in his horse, and that he knew his job. His help team talked him through getting shown, and Duck N Down got to work. Jamie said through his first run he remembers Todd Graham’s voice repeating for 2.5 minutes, ‘slow down Jamie, slow down Jamie’. The pair made it into the Amateur Non Pro Futurity final, and left that final with the highest aggregate score – before unfortunately being reviewed for a hot quit.

Jamie and Duck then competed in the Non Pro Futurities at Toowoomba and Goondiwindi. While Jamie said Duck was talented, he knew he was always going to be more suited to campdrafting. He was built to run. He always displayed a great ability to read a cow, a hunger to work a cow; and an outstanding work ethic.

Following the Goondiwindi Futurity, Jamie hogged off Duck’s mane and prepared him for his future as a campdrafter. Following a 6-month spell, Jamie gave the stallion a few gallops. “He was born to chase a cow”.

Jamie was in no hurry to prove what Duck N Down could do. He was happy to go to some drafts and enjoy his horse. However, it wasn’t long before the pair started getting some good results. Shortly afterward breaking his open status, Duck won his first Open draft at Brymaroo. It was important for Jamie to be the one to ride him for that first Open win.

Jamie is clear that for him, campdrafting is a hobby, not a job. He chooses not to travel for long periods of time to drafts, saying 4 days away is him limit. Jamie knew Duck should go to some bigger events, and that someone else would need to campaign him. Heath Sinclair took the horse to Warwick; and then later Pete Comiskey would campaign the stallion in some of Australia’s biggest drafts.

Duck sustained a small injury in 2019. A ligament tear needed time to heal. After 6 months recovery, and unfortunately missing Paradise Lagoons and Willinga drafts; Duck came back into work for Chinchilla. He and Pete Comiskey finished as Runners Up in the coveted Grandfather Clock Open Draft.

Duck N Down has competed in the country’s most elite drafts, at the highest level. At only 11 years of age in 2021, he has plenty of campdrafting ahead of him.

While Duck is a gentle character, and known for his level-headed nature; he is also an electric and powerful horse to ride. He is quiet enough to tie up next to mares, and a pleasure to be around. Jamie says that he really acts like he doesn’t know he is a stallion. However, in front of a cow he comes alive. Jamie describes him as being electric. “Every time he is in front of a cow, he gives 100% – he has always been that way”. Jamie says he is the calmest horse to sit on outside the camp, but he knows when it’s time to work.

“As soon as you bridge your reins, he drops 4 inches, and it’s on!  It’s like stepping into a supercharged Lamborghini”.

Duck N Down is an all-around athlete. In the camp his big powerful moves cover a lot of distance to help him easily cover a cow. Outside he is very quick. At the end of the day though, Jamie says it is his desire that makes him so good.

Even though, Duck N Down is known for that intensity on a cow and his ability to light up, he is still quiet enough for the kids to ride. Jamie’s 14 year old nephew, Jarvis Weaver, has claimed Duck N Down; saying that when he is 17, the stallion will be his campdraft horse. Both Jarvis and Kara’s son Cody ride Duck N Down’s 3yo progeny.

As it happens, Jamie’s sight-unseen purchase was a highly successful gamble. Not only has Duck N Down exceeded expectations as a competitor; he has proven himself as a sire. Jamie and Kara never planned to stand the stallion to outside mares, and reiterates that horses are their hobby. They started breeding Duck N Down to their own mares as a 3yo. Those first progeny were affectionately nicknamed Adam and Eve, and both are now successful campdrafters (named Down to Earth and Gunning Down). By the time he was a 5yo, Duck N Down was attracting outside mares. He was simply too good to stay under the radar and mare-owners wanted to breed to him. Duck N Down’s reputation precedes him these days and he is being joined to some of Australia’s best campdraft mares.

For Jamie and Kara, there is one main thing they want from Duck N Down; and that is simply to enjoy him. Jamie isn’t fussed if his stallion stands to the public or breeds a lot of progeny – this has just come about naturally because of the horse’s talent and popularity.  “We want to have fun – and have the whole family enjoy him”. Jamie says he gets as much enjoyment from watching the kids ride him, as he does watching him go around in a top level competition. 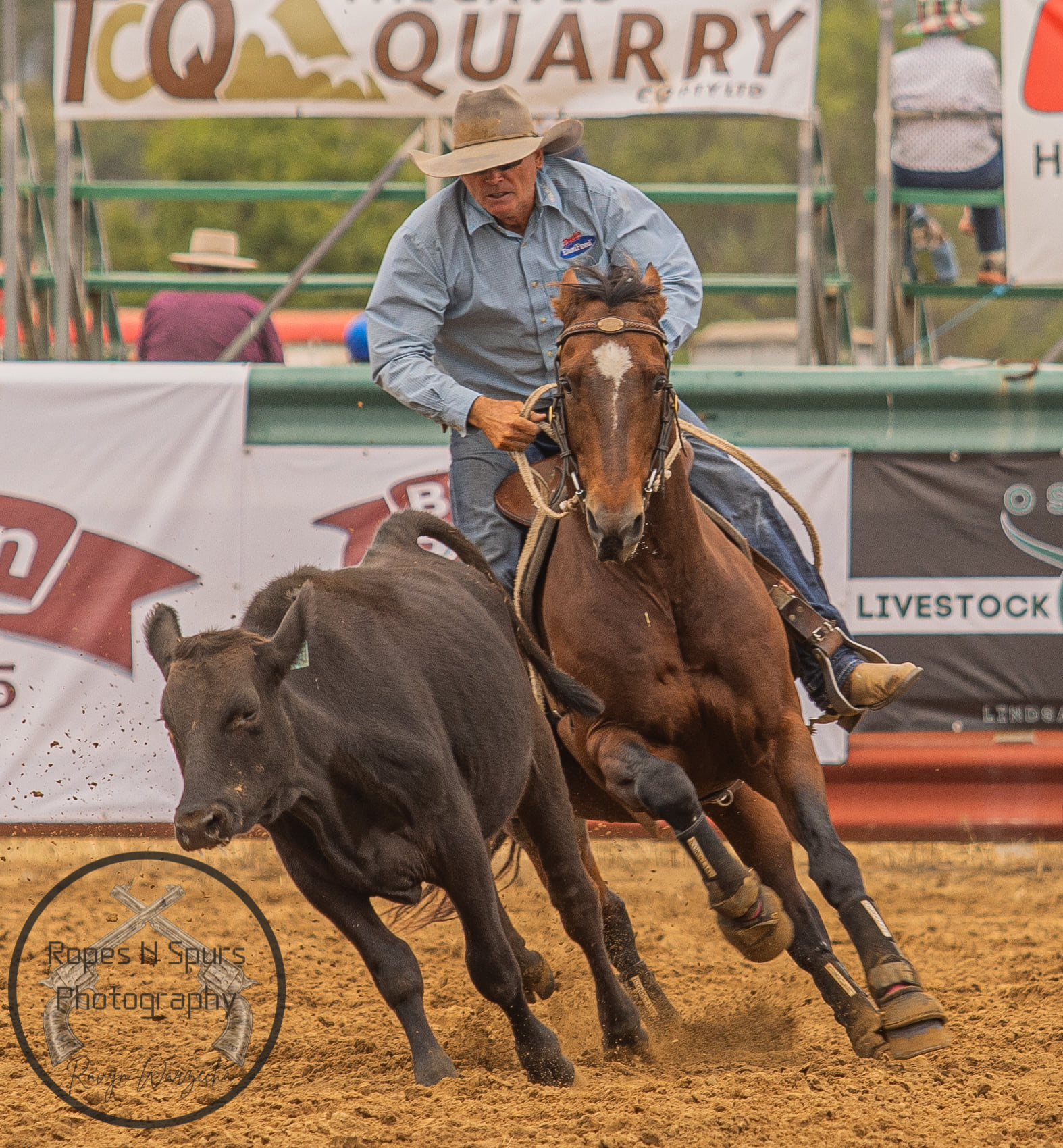 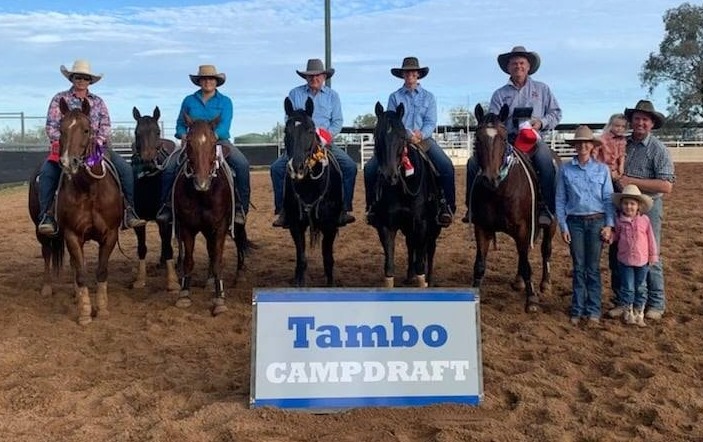 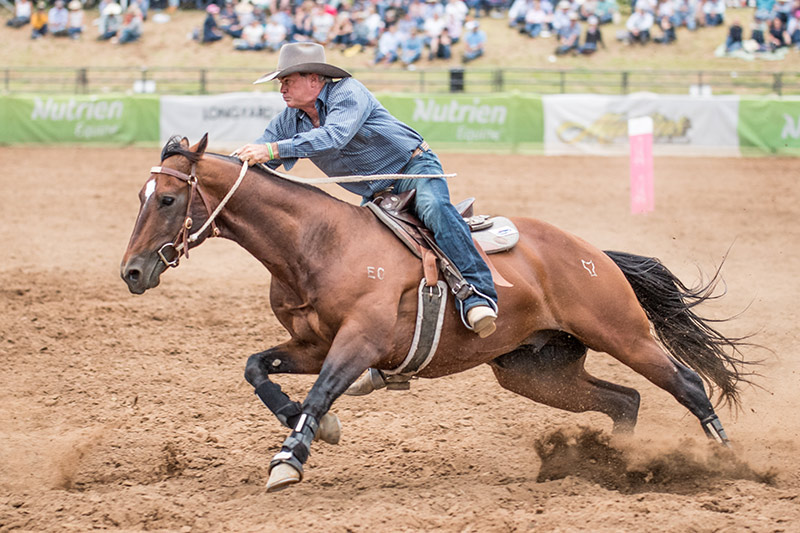 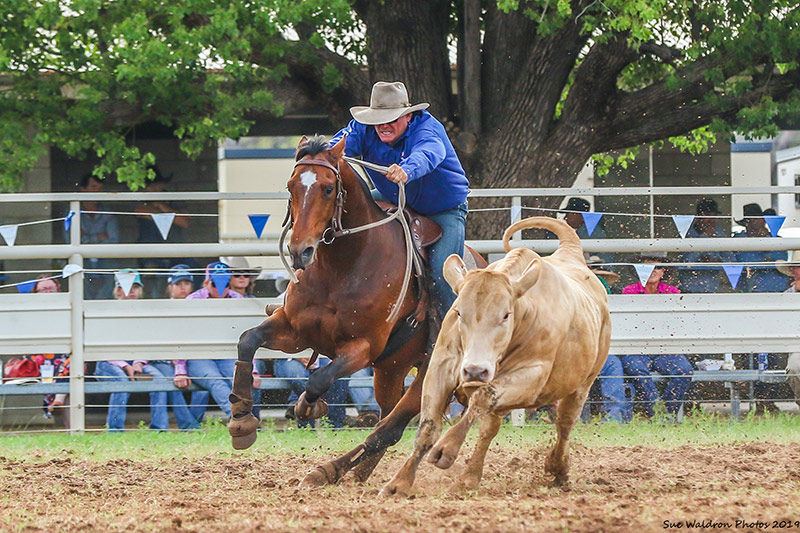 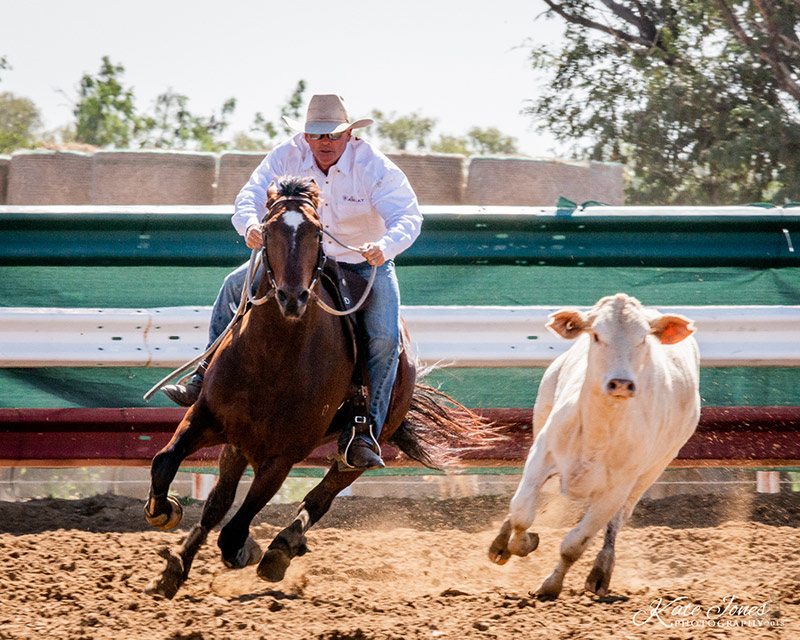 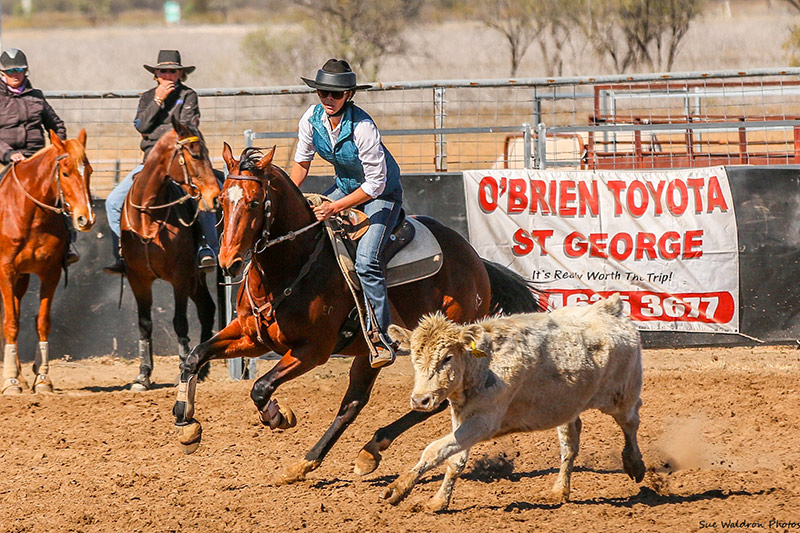 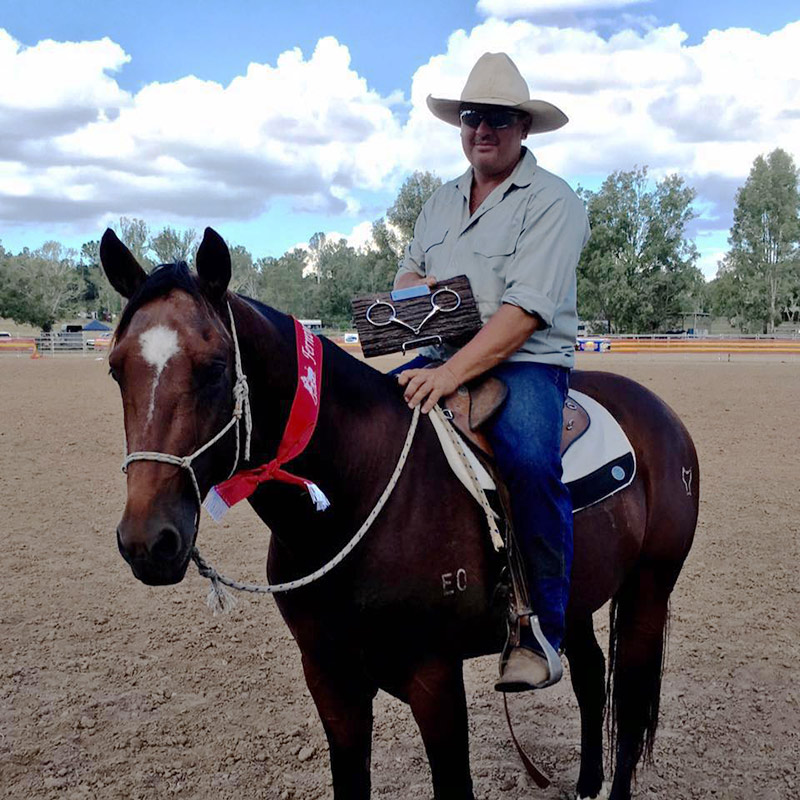 Double Gun Annie is a multiple campdraft place-getter and valued broodmare for Jamie and Kara. 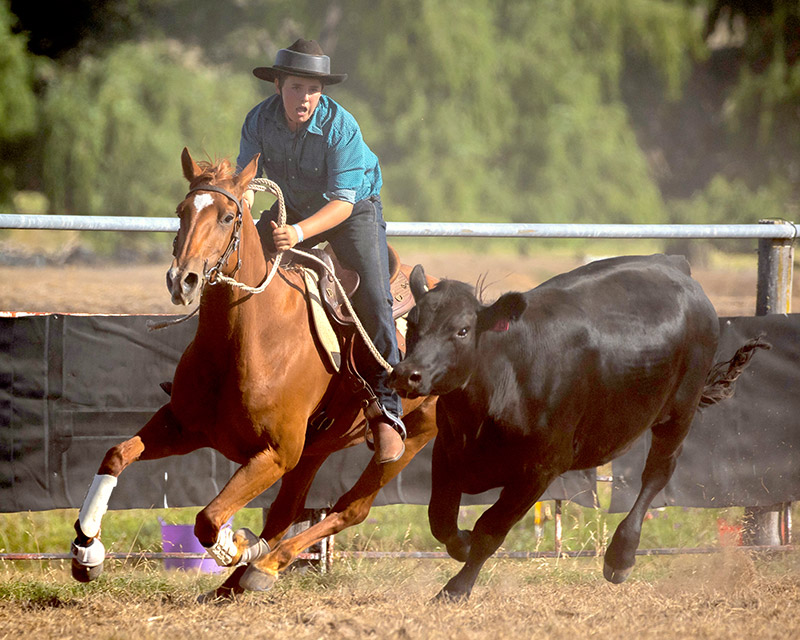 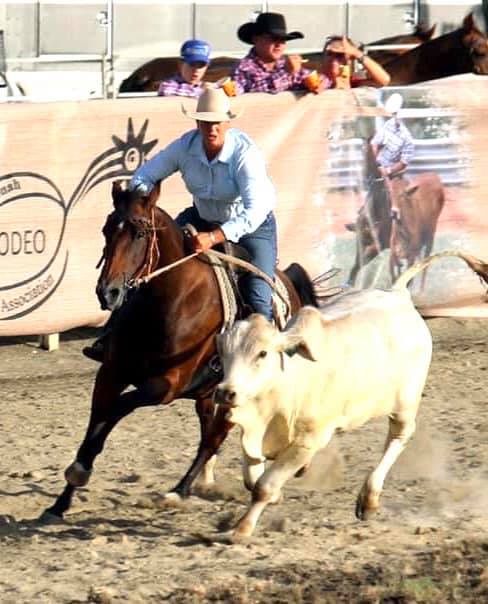 Chic Chic Boom has had numerous wins and places in open events and in Junior and Juvenile events with Jarvis Weaver. 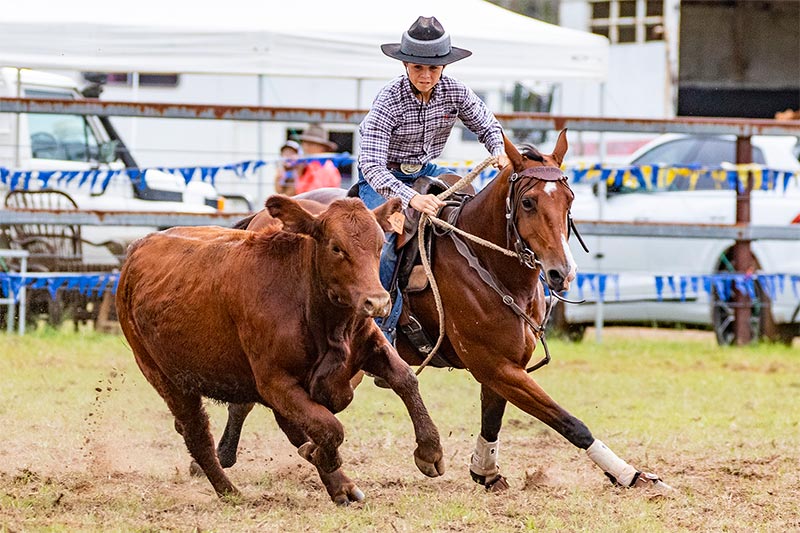 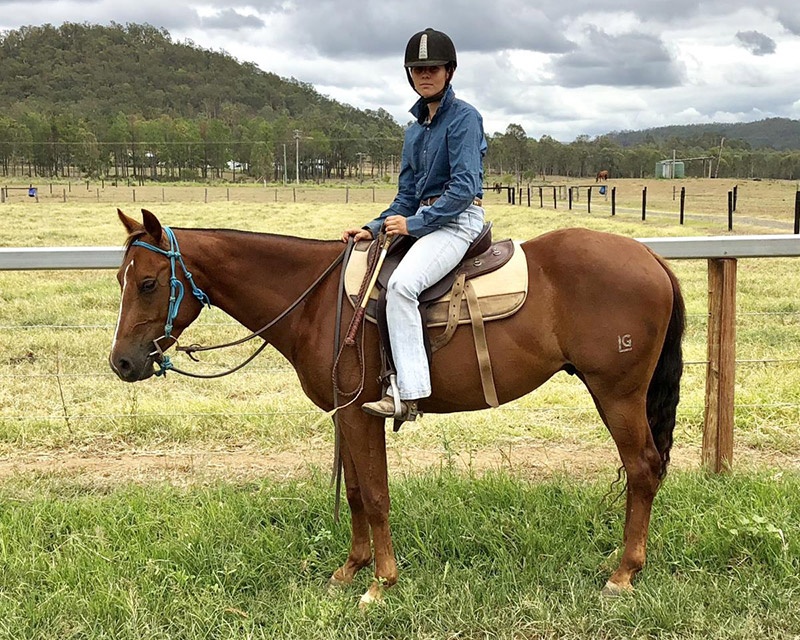 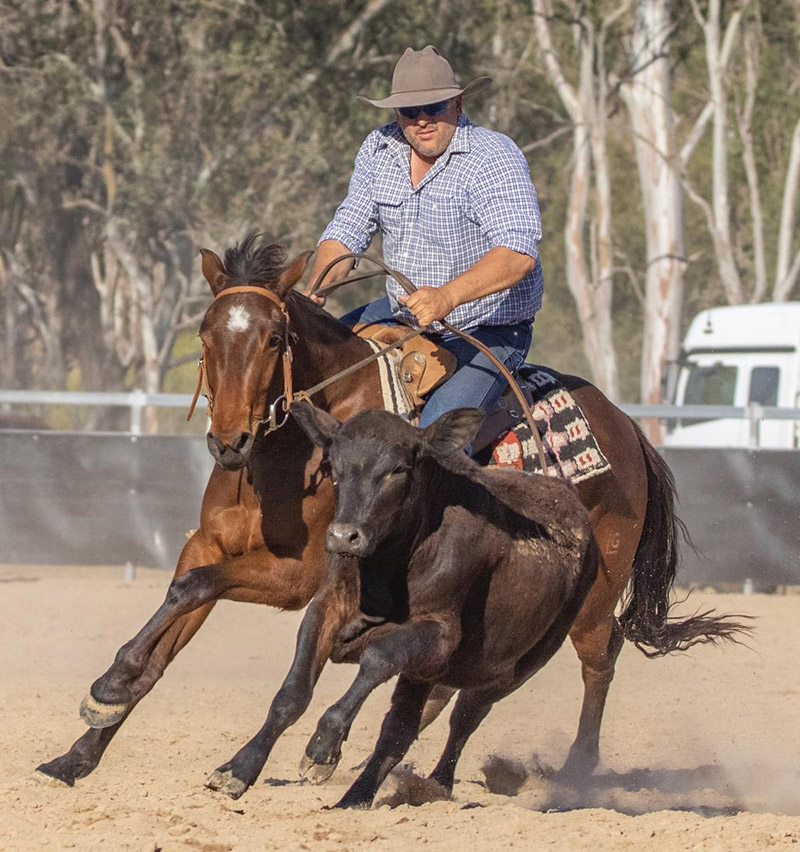 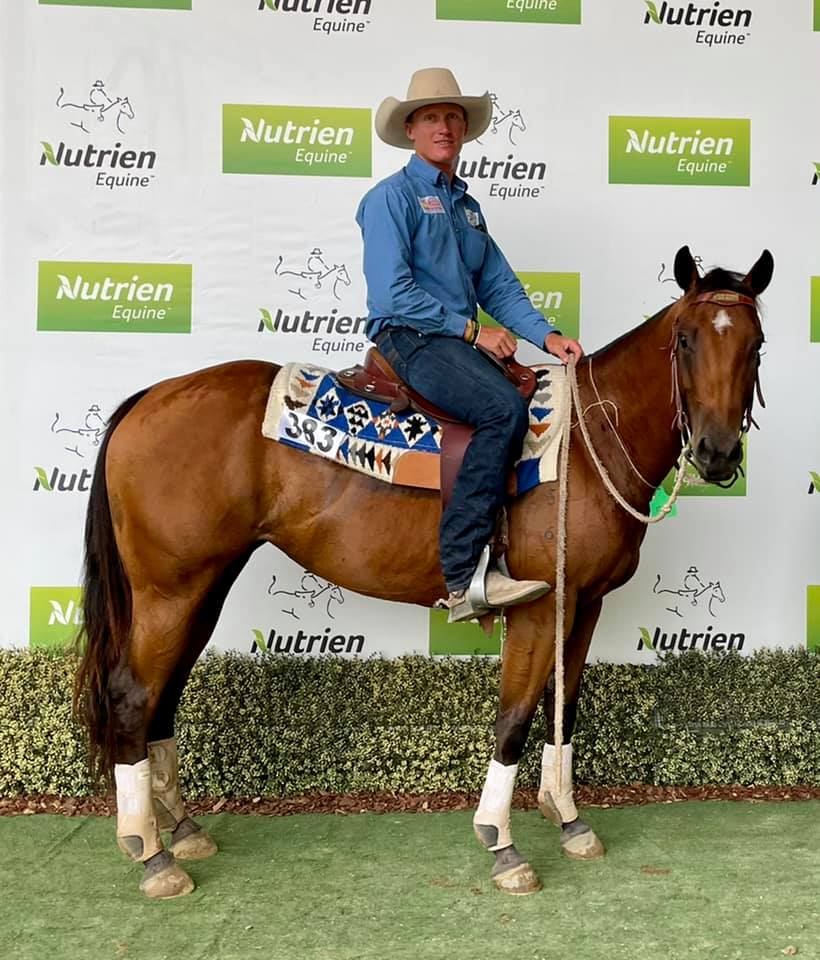 The first Duck n Down to hit the show circuit was Maria Jackson’s stylish filly “Shez Sum Duck” coming away with Weanling Champion at the NEQHA Feature Show. 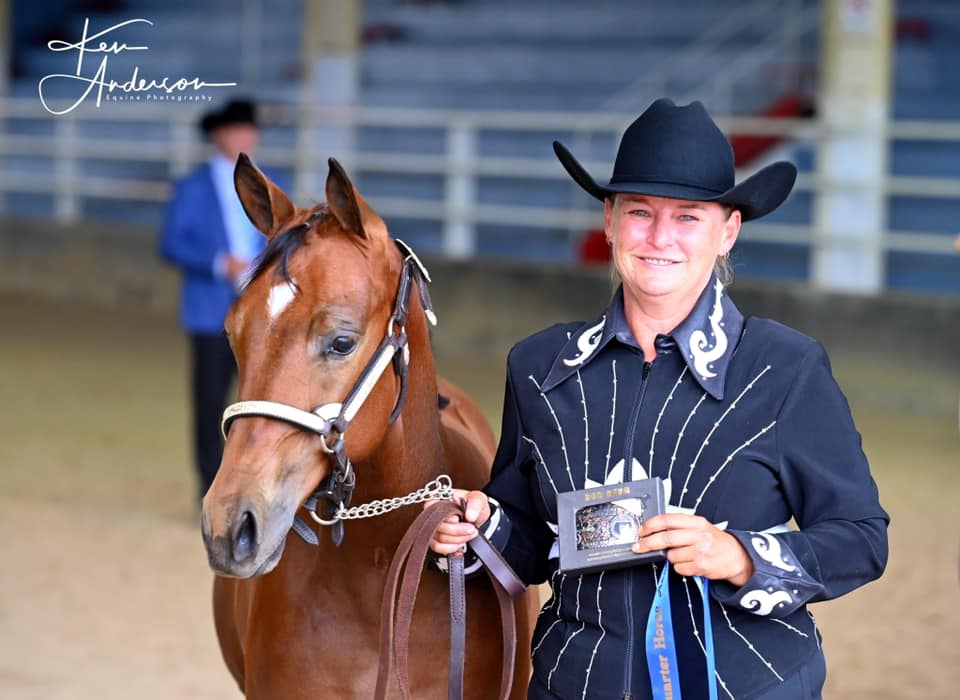 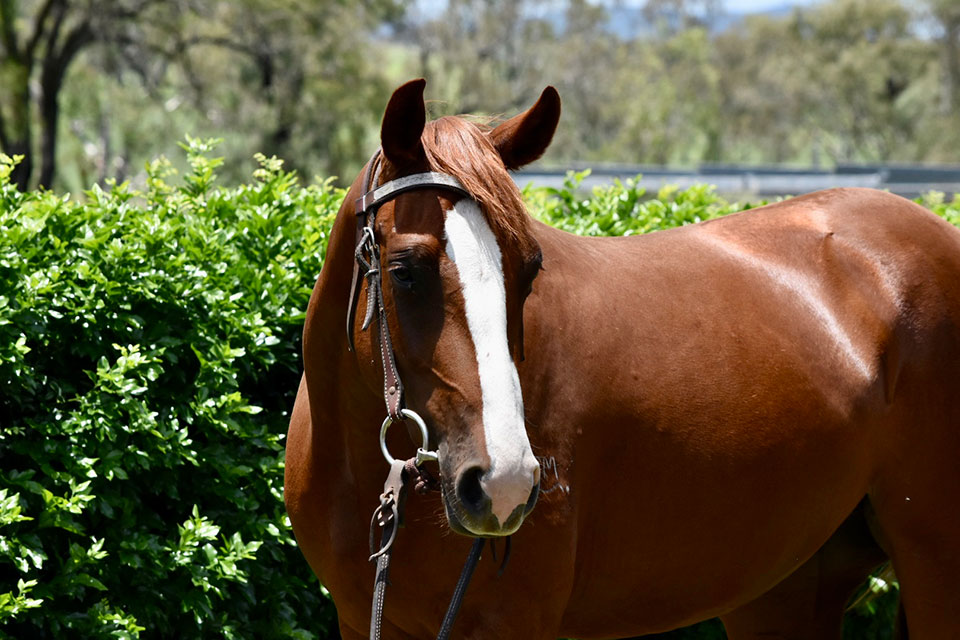 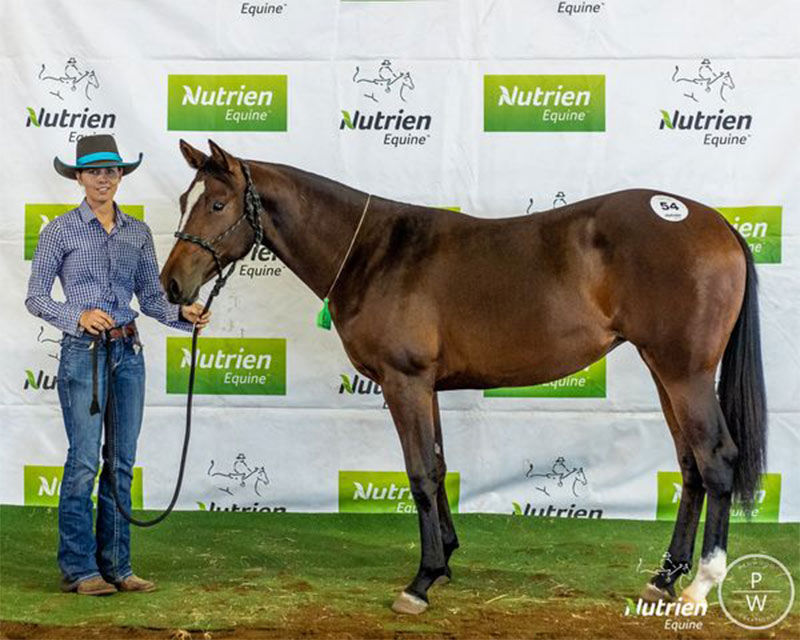 In 2012 Playboy Roy was inducted into the Hall of Fame.  The following is written by The Australian Quarter Horse Association.

“This year another exceptional stallion made his way into the Hall of Fame known by many as the infamous Playboy Roy (dec) Q-31044. Playboy Roy owned and nominated by Yulgilbar Quarter Horse Stud had sired hundreds of successful performance horses in Cutting, Campdraft and Western Performance, Youth and other events. His progeny had the stamp of being all-rounders embodying everything a Quarter Horse should be.

“Born in 1987, Playboy Roy was sired by Senoritas Playboy out of Genuine Rose. During his limited show career, he received a Register of Merit in Cutting and Western Performance and many National Cutting Horse Association titles.

“To date, he is the sire of 520 Quarter Horses with lifetime earnings from just 188 of his progeny reaching $11.2 million. His progeny has included the likes of campdrafting champions TK Playgirl and Yulgilbar Midnight Cowgirl, while in western pleasure Yulgilbar Kahlua Boy also won numerous awards. His progeny has not been reserved just for the western classes either, with KG Alittle Playboy making a name for himself in the Hunter Under Saddle events.

“The AQHA welcomes Playboy Roy into the Hall of Fame for many reasons including the legacy of champions that he left behind that continue to make their mark on the Australian western performance industry.” 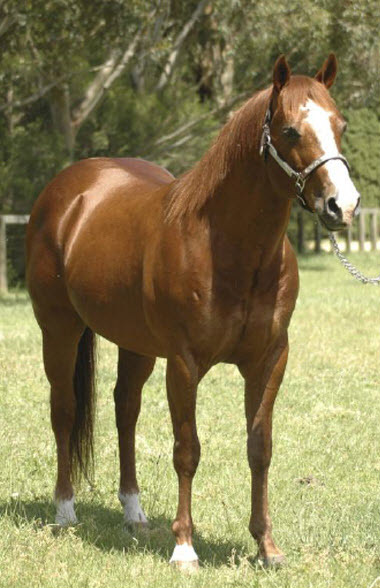 Blitzem Duck has been retained by Yulgilbar Quarter Horses as a broodmare, and has had 6 progeny to date (2021). Her dam, Oaks Fancy Duckling was one of Jon Brekelmans renowned foundation mares.

Oaks Fancy Duckling was one of John Brekelmans renowned foundation mares. She was the 1993 NCHA Open Derby Champion and Non Pro Derby Champion, as well as the 1992 Open Futurity Reserve Champion. 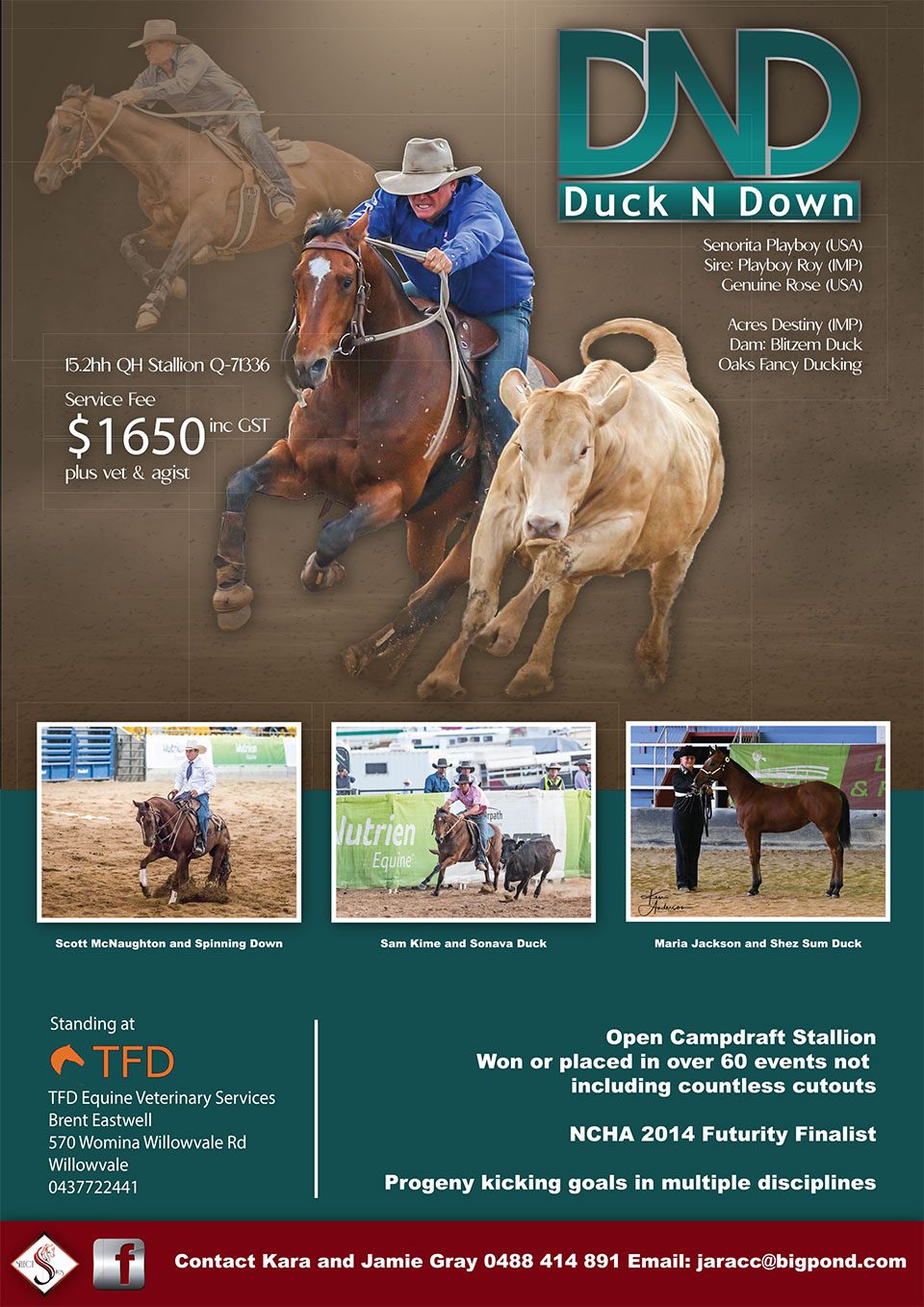