Kieran and Christy Davidson went along to the 2015 Landmark Classic Sale with a specific interest in a young colt. They were looking for a future sire and were drawn to his breeding, being by Bonlac Gigolo from Eskdale West Star Lady.

Top priority for Kieran and Christy was the mare line, and they were impressed with the other progeny that the dam had produced. “She is a very good campdraft mare herself, and her progeny have performed really well. We wanted a hybrid-cross and she stood out to us, being by Docs Spinifex”. Upon seeing the colt at the sale, there was no question that he was the horse they needed to buy. “He ticked every box that we, as a family, were looking for.”

The colt became known affectionately as Trev, after a friend of the Davidson’s; and because as Kieran says, “I’ve never met a bad Trev”.

Kieran and Christy had no desire to rush the horse and after the sale, put him straight out in the paddock for 6 months to grow. From the day he came back in, Kieran and Christy were thrilled with the colt. “He has always been consistent – a real gentleman. In fact, in the Stockmans Challenge circuit, Edenvale Orion is affectionately referred to by many as, ‘Mr Consistent’.”

Christy and Kieran are a real partnership, and have shared the responsibility of training and competing Edenvale Orion.  In fact, he is quite the family horse – and has become the main mount for their 3-year-old son, Hunter Davidson.

A great Stockmans Challenge horse has to be good across a range of skills, versatility is paramount, but so is a trainable horse that can learn and accept all the skills they will require.  For Kieran and Christy, training wasn’t a rush job. They take their time with all their horses and do a lot of outside work. They have a dedicated cross country course but also incorporate training into day-to-day stock work.

What makes Edenvale Orion so good? He is the whole package. As Kieran explains, “I’ve never ridden a horse with a mind like his. Nothing phases him. He is a gentle giant, and wants to please”.  Christy and Kieran say a big strength for this horse is his athleticism and this is what makes him so good in the final, when it comes to the brumby catch. Kieran also describes the stallion as being cowy and soft.

In October of 2020 Kieran and Christy planned on taking Edenvale Orion on the campdraft circuit to enter the next phase of his competition career. Just before the first of these drafts, Kieran broke his leg so was unable to compete, however Christy campaigned Trev in the Ladies draft and made the final. There is little doubt that he will be as impressive a campdraft horse as he is in the Stockmans Challenges.

Edenvale Orion’s young progeny are showing a lot of promise. They have very trainable minds, like he does. Kieran and Christy are thrilled with his progeny and this popular stallion is on the path to becoming as great a sire as he is an individual athlete. 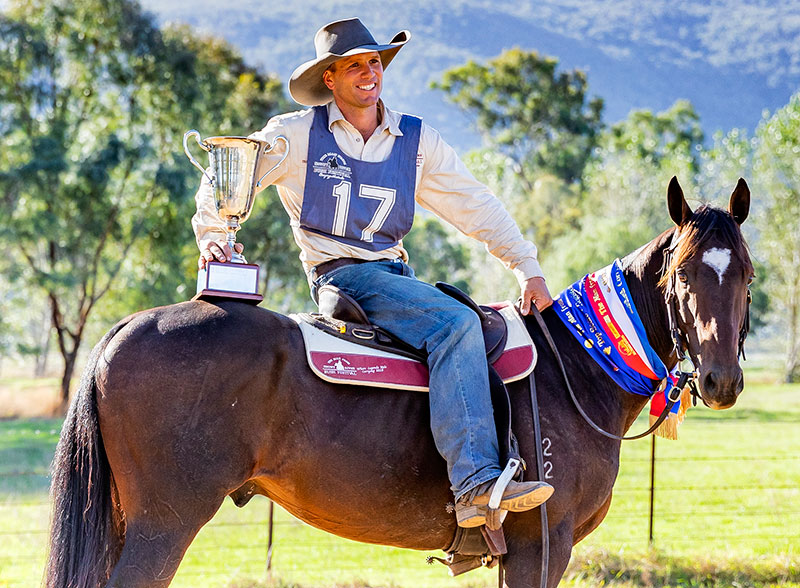 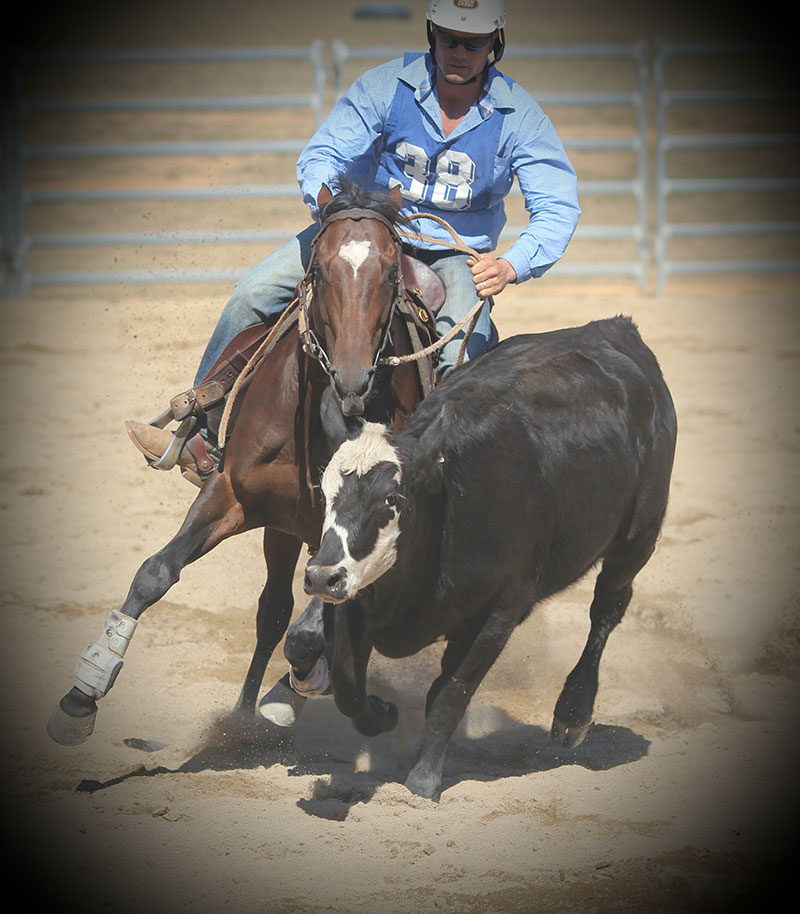 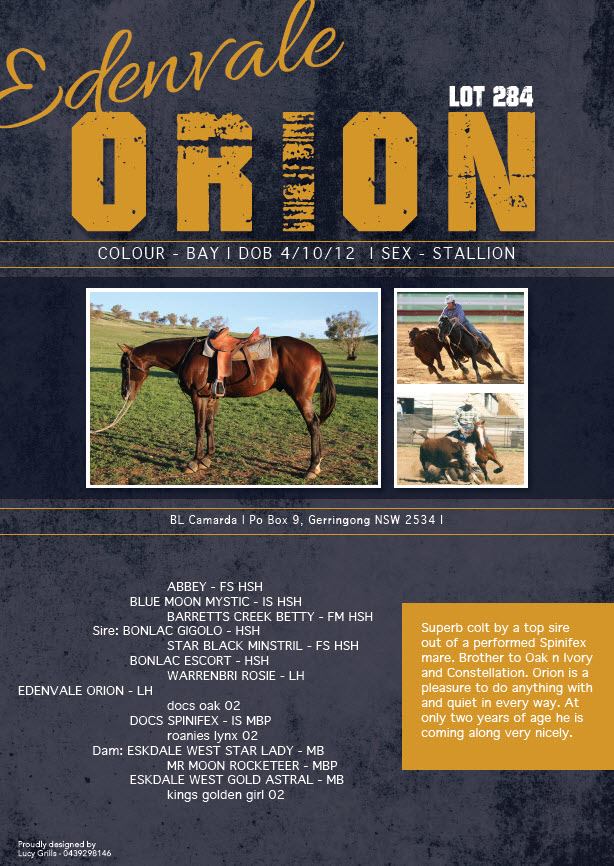 Kieran and Christy are thrilled with Edenvale Orion’s young progeny who are showing a lot of promise. They have very trainable minds, like he does. They feel this very popular stallion is on the path to becoming as great a sire as he is an individual athlete.

Frankie has had limited outings due to Covid but in all 4 Ag Shows she has attended she has won her led ASH filly class. 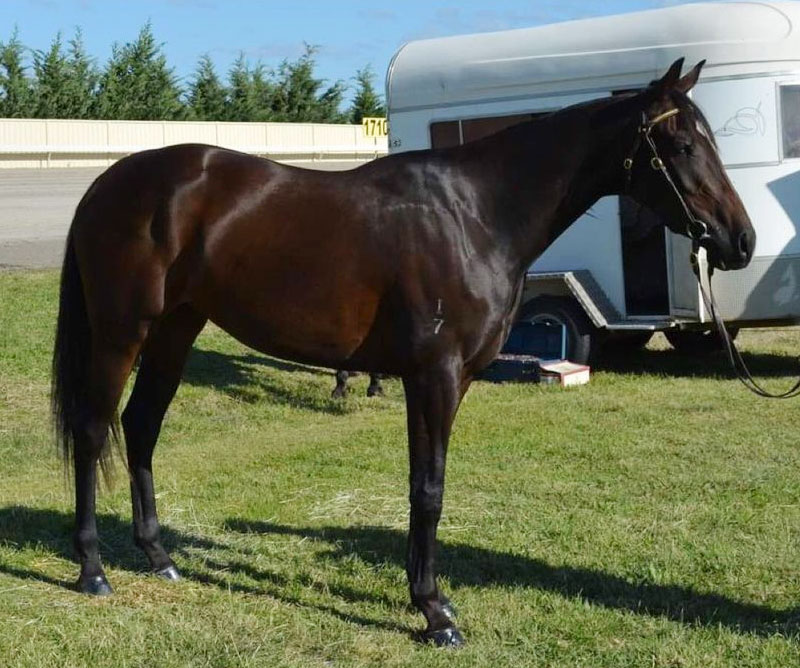 Kind, sweet, easy travelling filly who will be offered for sale at the 2022 Nutrien Classic.

Bonlac Gigolo is a sire who offers breeders the opportunity to access a rare cross of three extremely well performed campdraft bloodlines.

Abbey, Star Black Minstral and Romeo represent the blue ribbon genetics of the campdraft industry and in Gigolo they have combined to produce an outstanding individual with looks and ability.

A feature of Gigolo as a sire is not only the above sire lines, but he also has maternal ancestry with a similar degree of ability and results to match. 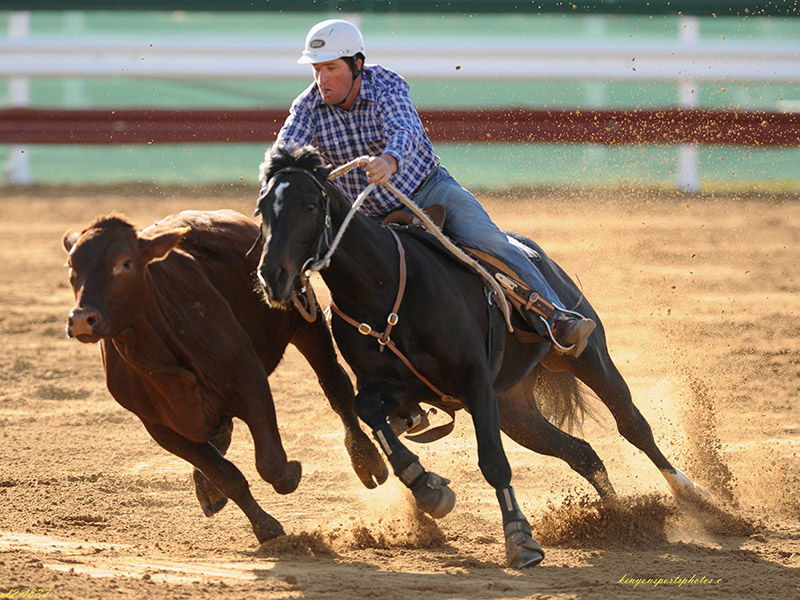 Son of the legendary Abbey and the mare Betty (winner of over 40 drafts), BLUE MOON MYSTIC – IS died in 2006 at the ripe old age of 34. The grey stallion was a legend in his own time, but his name continues through the deeds of his progeny.Blue Moon Mystic is the only sire to have sired a Gold Cup Winner (Stephen Hill’s Ashanta) and to have won both the Warwick Gold Cup and the Canning Downs.Reference articles: 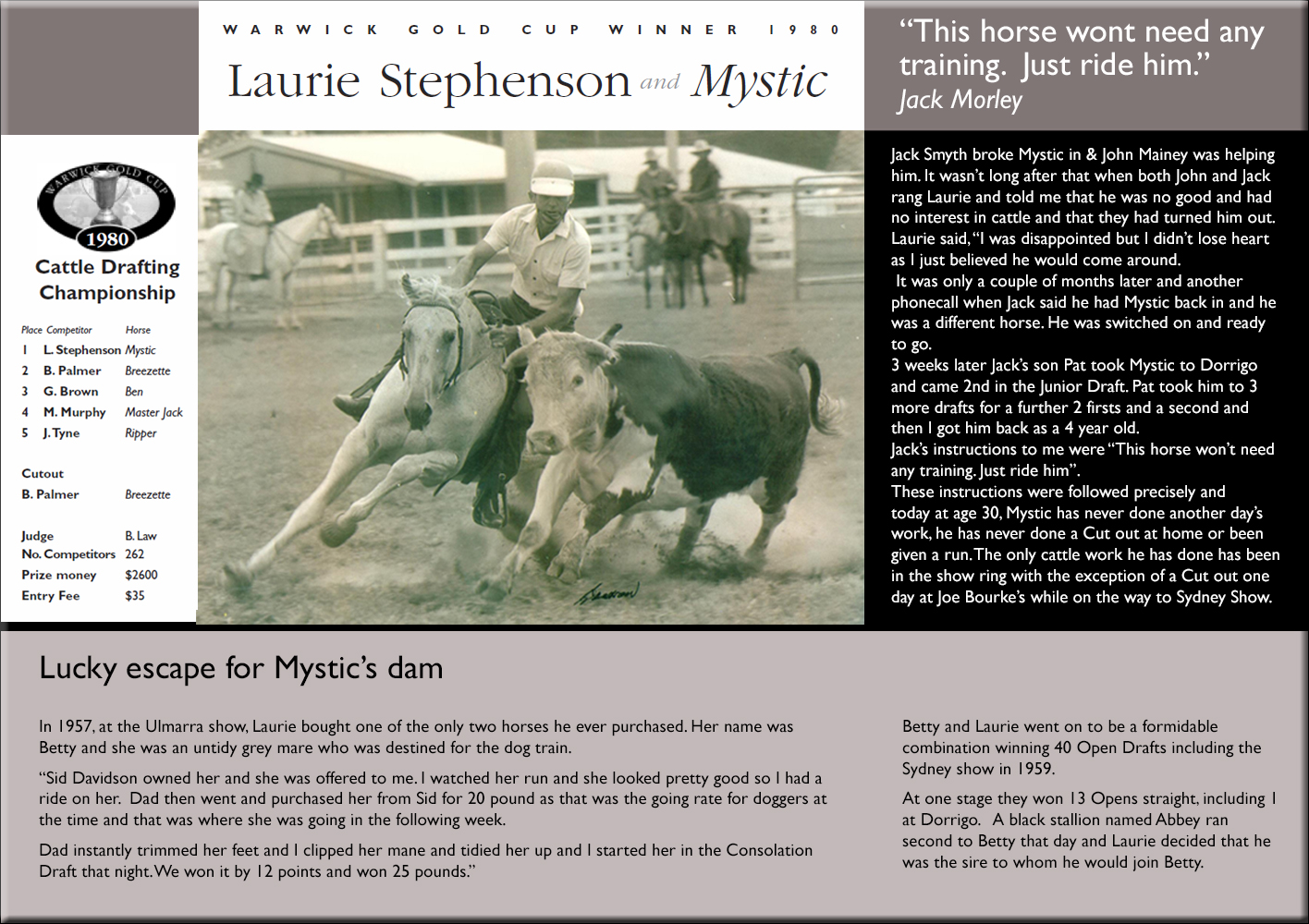 “Mick Connolly owned Star Lady (we called her Molly).  Molly is the sweetest mare….was actually hubby’s favourite mare. Neither of us are surprised that your boy is so gentle. Takes more brains for a horse to show genuine kindness than it does for them to do anything else. The measure of a horse is that reasoning depth of mind. Makes them either outstanding or ordinary.” 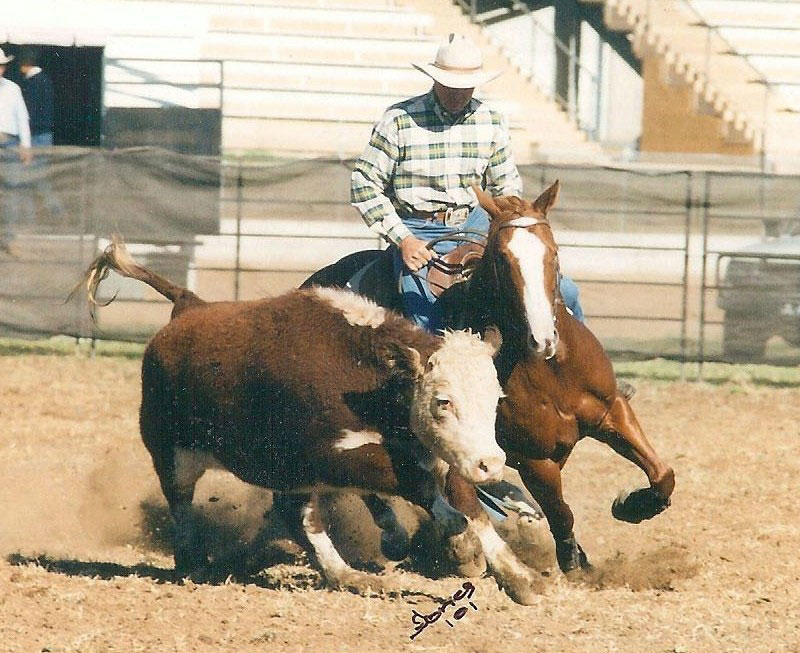 Trev has the most beautiful temperament, even 2.5 yo Hunter Davidson rides him!  “One more!”