Halls Stock Horses are situated at “Lightview”, 12km east of Goondiwindi, Queensland, the home of Terry and Chris and their 2 campdrafting stallions, Hazelwood Conman, & Hazelwood Showman.

Both of these magnificent sires are from the great Hazelwood Romance. Each an individual and each offering their own unique characteristics to mare owners.

The question has no answer.

As the breeders and owners of both sires, they are immensely proud of Romance and her contribution to the industry. Terry and Chris confidently recommend the strengths of each horse. To quote Terry, “I had them all on the road mustering as young horses and they were all the same. Anyone would be proud to ride any of them.”

Each has their strengths and put simply:

Terry Hall is regarded as one of the finest drovers, campdrafters and horsemen this country has ever seen.

He is a third generation drover and the son of Boss Drover Artie Hall. Terry rode from the time he could walk and he learned horse handling and cattle skills first hand from some of the greatest names in the Australian bush.

Terry first went droving at the age of 14 and has taken mobs of up to 3000 head of cattle along traditional stock routes throughout Queensland, New South Wales and the Northern Territory.

Before embarking on his passion for campdrafting, Terry competed with and won against the best Australian Rodeo riders in buck-jumping, roping and bulldogging, and in 1981 he competed against the world’s best in Calgary, Canada.

Terry is revered as being one of the greatest campdrafters in Australian history. With a quiet seat and gentle hands, he has achieved what most competitors could only dream of. He has twice won the Warwick Gold Cup and  three  times won The Grandfather Clock and the Sydney Royal World Championship Draft. He has also won the Nat Buchanan Trophy, the ABCRA Championship Draft, the Acton Super Beef Draft at Paradise Lagoons and the Golden Gate at Walcha. Terry was also awarded the coveted ABCRA Campdrafting Hall of Fame and the annual title for most successful rider in 1974, 1977, 1979 and 1991.

Terry is a true Australian who is highly respected for his extraordinary stockmanship and bushcraft. He has appeared on Sixty Minutes and has represented the Australian country lifestyle on several media programs. His influence stretches far beyond the simple world of campdrafting and his horsemanship feats are legendary.

Chris was born in Coonamble into a family that revolved around horses and horsemen and in this environment she became a superb horsewoman in her own right. Her father, John Lundholm, trained racehorses and  competed in rodeo and he had Chris riding at Pony Club from an early age. Her mum took her to shows culminating in “Girl Rider” classes at the Sydney Royal.

After getting her Pony Club Instructor’s Certificate, Chris began to widen her interests by riding in some races as a jockey for her father and playing polocrosse. Wanting to be involved in anything equine she was then being introduced to campdrafting by her friends, Noel and Teddy McMahon.

Chris met Terry at the Trangie Rodeo in 1973 and they married in 1975, followed by a five or six year honeymoon droving with Terry.

Terry and Chris continued their life in the long paddock until their two children, Jane and Ben, went to school. They were based at Wee Waa, Terry’s home town, until they moved to “Lightview”, east of Goondiwindi over a decade ago. The prefix “Hazelwood” comes from the name of the Halls’ Wee Waa property.

Jane is a proud  wife and mother of her and Cameron’s two sons, Jackson and Cooper.

As a child growing up Jane was always surrounded by horses and lived in an environment dominated by horsepeople, droving and campdrafting. Like all members of the family she started competing early and soon developed into a serious campdraft competitor in her own right. Jane won the Nationals Finals Junior Draft at Yass, was runner up Lady Rider in the ABCRA, won the Grandmother Clock Ladies Draft at Chinchilla and placed third in the Warwick Gold Cup in 1993. Jane is always in and around the places at Warwick, but her major win came in 2013 when she won the Ladies Draft at Warwick.

Jane loves the campdraft sport and she has now expanded her involvement to include photography, a passion that she is enjoying and is allowing her to give more back to the sport she loves.

Ben Hall is a fourth generation drover, like his dad Terry and his grandfather Artie.

Ben was competing early in campdrafts and immediately took up the family tradition. Winning!  He soon won the Junior and Associate Rider Titles in the ABCRA, and the Open Championship Draft at Walgett while still a junior.  After several big wins Ben’s ambition was to become the youngest person to win a Warwick Gold Cup. He achieved this in 1996, aged 19. Ben then won again in 1999 and a 3rd win in this coveted event has him one win ahead of his father Terry.

Ben is only the third competitor to ever win the Bronc Ride and the Gold Cup at the Warwick Rodeo since its inception in 1929.

Ben has also won the Super Beef Draft twice at Paradise Lagoons, the Chinchilla Grandfather Clock, the Condamine Bell and the ACA Open Rider of the Year. He  has also brought home a Canadian Rodeo Association title after competing against the world’s best Bronc riders.

Ben is married to wife, Jaye and they have two children, Madison and Wyatt. Madison shares the same passion for horses as her parents and Wyatt may just follow dad’s footsteps in the future.

As a family, we have made a decision to donate a number of Conman services in order to support our favourite Children’s Charities. While we know a lot of people are facing very challenging times right now, we believe that little kids facing tough times are some of the bravest people we know, so Conman will be doing his very best to try and help them. We intend to make that our chosen charity for the next few years so we can really make a difference.

Thank you for your support, and we sincerely hope that you will breed the horse you dream about in the 2017 breeding season.’ 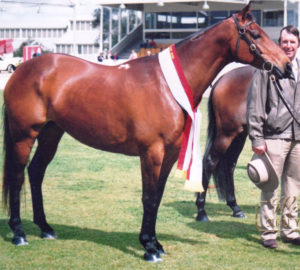 Tony Swagger of Wee Waa was the man responsible for breeding Romance, when he decided to join his mare, Cardonis Breeze to the great Warrenbri Romeo.

Terry and Chris were also living in the Wee Waa district at the time. Terry had noticed Breeze and when he saw her foal, Romance, he was quick to put in an offer to buy her.  Due to an accident, Romance was 4 years old when she was broken in. At that age she was fairly difficult to break in, Terry as usual, was unfazed.

As with all of his horses, Terry gave this young mare a stint on the roads droving and soon Romance became part of his droving team. Romance became one of his trusted team and this began a partnership that would span eight years.

The partnership between the Halls and Romance proved triumphant with the mare winning 114 campdrafts in 8 years.

Another highlight was Romance being awarded the prestigious Nat Buchanan Award for campdrafting in 1991.

At Upper Horton in 1995, Romance and Terry commenced the cut-out and the mare stumbled, popping Terry out of the saddle.  Tragically this was to be the mare’s last run as she had trod on a rock, chipping a bone in her foot – this brought about an untimely retirement from what had been a brilliant career.

Romance, at 14 years of age, entered the next successful phase of her life – as a broodmare. Romance would produce 8 foals – 3 fillies and 5 colts – with the most recognised being the outstanding Hazelwood Conman.

2005 brought both triumph and tragedy to Terry and Chris Hall. Conman was hitting his straps and Chris had taken out the Warwick Ladies Draft with him.  On returning home from the draft, Hazelwood Romance had suffered a painful injury and they were forced to end the life of their beloved mare.  Romance was buried at the Halls’ property at Goondiwindi, where a special plaque takes pride of place to commemorate her life.

“Terry and Romance …. A brilliant partnership that spanned eight years” 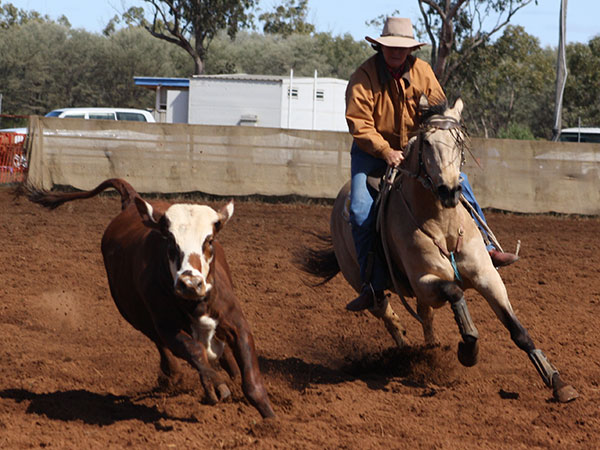 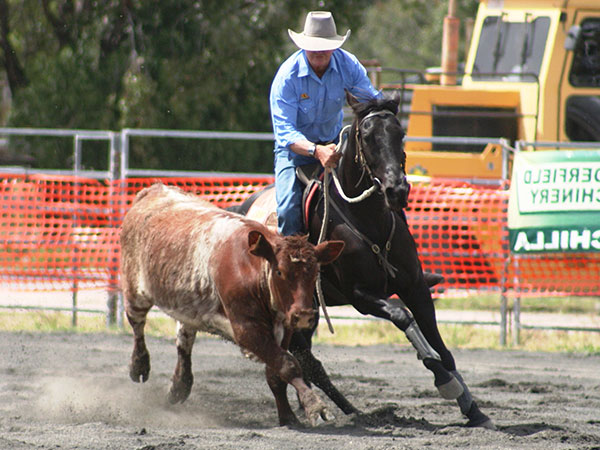 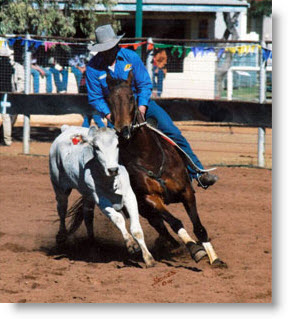 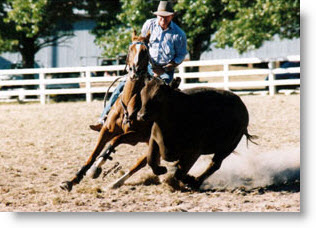 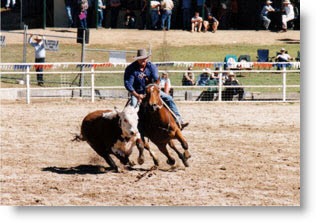 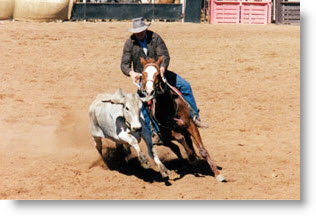 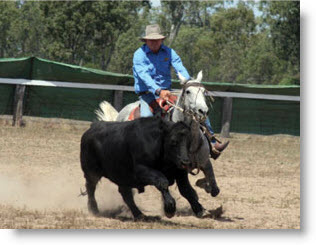